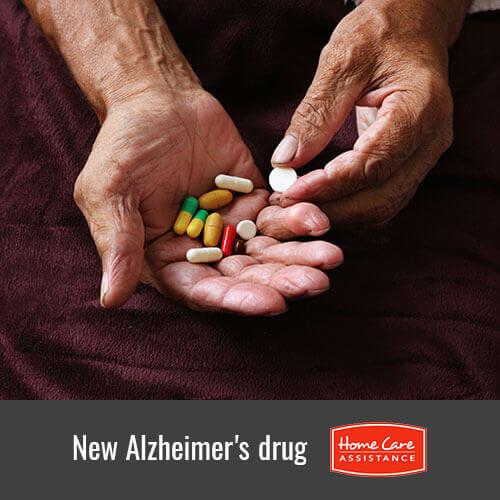 Researchers have been hard at work to determine if a cure for Alzheimer’s disease exists. Though nothing definitive has come of these studies, a new medication called aducanumab may prove to be helpful in alleviating certain symptoms of Alzheimer’s. The Roseville home care experts at Home Care Assistance examine this revolutionary drug and what it could mean for the future of Alzheimer’s treatments.

Though researchers are still unsure of exactly what causes Alzheimer’s, they do know plaques are partially responsible for at least some of the brain damage that can take place. Plaques are long strands or clumps of protein that cling to healthy tissue and force the brain to become inflamed. Many drugs can slow the development of plaques, but very few have been able to get rid of them.

A recent study conducted on 166 seniors revealed aducanumab might be one of the first drugs to actually destroy existing plaques. In turn, it also slowed the loss of memory and thinking in many of the research subjects. Seniors who are considering this style of medication should keep in mind most of the test subjects were in the earliest stages of Alzheimer’s.

Managing the Symptoms of Alzheimer’s

Just as with many other types of Alzheimer’s medication, the primary goal of aducanumab is to manage the symptoms. Some of the most common symptoms of Alzheimer’s cannot be stopped, but they can be slowed so a senior can enjoy a higher quality of life. Aducanumab treats just a handful of Alzheimer’s symptoms, and most seniors will benefit from taking additional medications and making lifestyle changes.

According to the initial studies, aducanumab does nothing to alleviate other Alzheimer’s symptoms like mood swings. Additional research is also needed to ensure the drug is safe enough for general use. Until that time, seniors with Alzheimer’s should continue to work with specialists trained in Roseville Alzheimer’s care and learn more about their other treatment options. These seniors must also attempt to stay as healthy as possible to put themselves in the best position to combat this disease and its symptoms.

Revolutionary drugs are not the only way to stave off cognitive decline. At Home Care Assistance, we offer a program called the Cognitive Therapeutics Method, which uses fun activities to provide seniors with regular mental stimulation. In addition to the Alzheimer’s and dementia home care Roseville families trust, we also offer specialized stroke and Parkinson’s care. For more information and to schedule a no-obligation consultation with a knowledgeable Care Manager, call 916.472.0605 today.