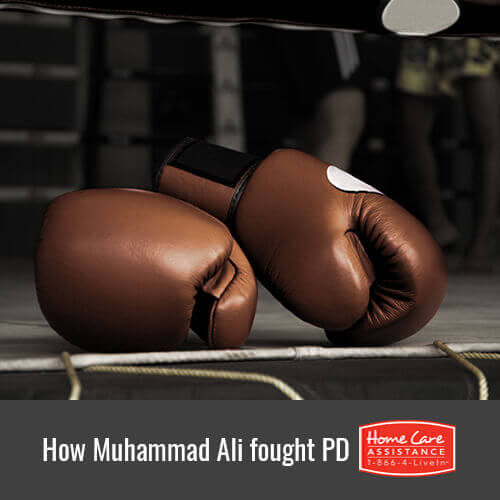 Muhammad Ali, one of history’s most legendary athletes, developed Parkinson’s in the early 1980s. Before his battle with the disease ended on June 3, 2016, he was considered one of the most prolific public figures with Parkinson’s. The Roseville home care experts at Home Care Assistance discuss Parkinson’s and the effects it had on Ali’s life.

Ali was officially diagnosed with Parkinson’s in 1984, at the age of 42. Neurologist Dr. Stanley Fahn noticed the speedy, vivacious boxer was moving much slower than normal and had a decreased range of facial expressions. However, Dr. Fahn hesitated in his diagnosis, believing Ali was too young to show symptoms of Parkinson’s because it typically develops in adults over 50.

Ali had been showing signs of Parkinson’s as early as 1980, and many speculate he carried the condition even longer. His delayed diagnosis may have led to more severe symptoms. Because Parkinson’s halts the brain’s dopamine production, progressively stiffening motor functions, it is popularly characterized as a slow affliction. However, if not treated quickly, its symptoms can become more severe early on, only to stabilize later. Ali was a textbook example of this result.

The Causes of His Condition

Parkinson’s has several possible causes. While many attribute Ali’s condition to his brutal boxing career, science indicates genetic factors also played a heavy role. No matter the cause, Parkinson’s almost always responds to dopamine treatments. However, in some cases the treatments can overcorrect the problem, which is what causes the tics often associated with Parkinson’s.

The Legacy He Left Behind

For the rest of his life, Ali worked to spread Parkinson’s awareness and raise money for its research. Along with Michael J. Fox, a fellow fighter against Parkinson’s, Ali and his wife Lonnie lobbied Congress for research funding in 2002. Ali also funded the Muhammad Ali Parkinson Center at Barrow Neurological Institute in Phoenix, Arizona.

After a Parkinson’s diagnosis, seniors and their families face a challenging road ahead. Let the dedicated caregivers at Home Care Assistance step in to help your elderly loved one lead a happier and healthier life. Our caregivers can assist with mobility and exercise, provide transportation and medication reminders, prepare nutritious meals, and help with many other important tasks. To learn more about the Parkinson’s home care Roseville families trust, call one of our knowledgeable Care Managers at 916.472.0605 to request a complimentary consultation.